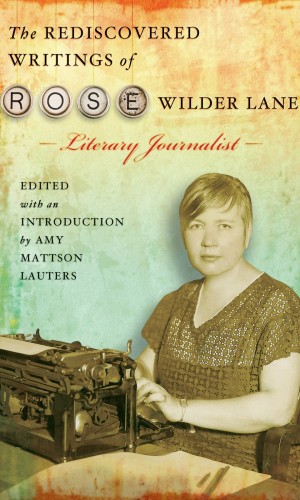 Through numerous short stories, novels such as Free Land, and political writings such as “Credo,” Rose Wilder Lane forged a literary career that would be eclipsed by the shadow of her mother, Laura Ingalls Wilder, whose Little House books Lane edited. Lane’s fifty-year career in journalism has remained largely unexplored.
This book recovers journalistic work by an American icon for whom scholarly recognition is long overdue. Amy Mattson Lauters introduces readers to Lane’s life through examples of her journalism and argues that her work and career help establish her not only as an author and political rhetorician but also as a literary journalist. Lauters has assembled a collection of rarely seen nonfiction articles that illustrate Lane’s talent as a writer of literary nonfiction, provide on-the-spot views of key moments in American cultural history, and offer sharp commentary on historical events.
Through this collection of Lane’s journalism, dating from early work for Sunset magazine in 1918 to her final piece for Woman’s Day set in 1965 Saigon, Lauters shows how Lane infused her writing with her particular ideology of Americanism and individualism, self-reliance, and freedom from government interference, thereby offering stark commentary on her times. Lane shares her experiences as an extra in a Douglas Fairbanks movie and interviews D.W. Griffith. She reports on average American women struggling to raise a family in wartime and hikes over the Albanian mountains between the world wars. Her own maturing conservative political views provide a lens through which readers can view debates over the draft, war, and women’s citizenship during World War II, and her capstone piece brings us again into a culture torn by war, this time in Southeast Asia.
These writings have not been available to the reading public since they first appeared. They encapsulate important moments for Lane and her times, revealing the woman behind the text, the development of her signature literary style, and her progression as a writer. Lauters’s introduction reveals the flow of Lane’s life and career, offering key insights into women’s history, the literary journalism genre, and American culture in the first half of the twentieth century.
Through these works, readers will discover a writer whose cultural identity was quintessentially American, middle class, midwestern, and simplistic—and who assumed the mantle of custodian to Americanism through women’s arts. The Rediscovered Writings of Rose Wilder Lane traces the extraordinary relationship between one woman and American society over fifty pivotal years and offers readers a treasury of writings to enjoy and discuss.